There are many free online board and card games to play with your friends, but popular card games are still more engaging at a party or just waiting for the time to pass. But sometimes, choosing which card game to buy may be difficult, as hundreds of card games exist.

This is where we step in. Our card game experts had the seemingly impossible task of compiling a list of today’s most popular card games.  There are various choices- there should be something for everyone here, whether you prefer cheap picks or a complex playstyle. Since Halloween is just around the corner, we will also name at least 3 of our favorite horror-themed card games. 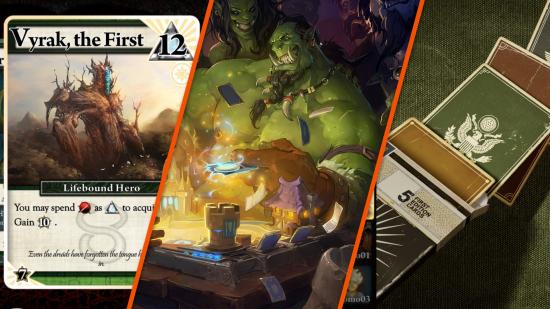 Without further ado, here are our choices for the most popular card games you should buy, if you still don’t have them on your shelves.

Jaipur is one of the best card games ever created. It has reaped several awards because of its friendly, colorful, and addicting, in a good way.

Players assume the role of shopkeepers in Jaipur in India. The players aim to get an invitation to the maharaja’s court. The only way to achieve this is to become the richest businessman in the country. Whatever it takes– ruthless techniques are the rule to get ahead of the pack. 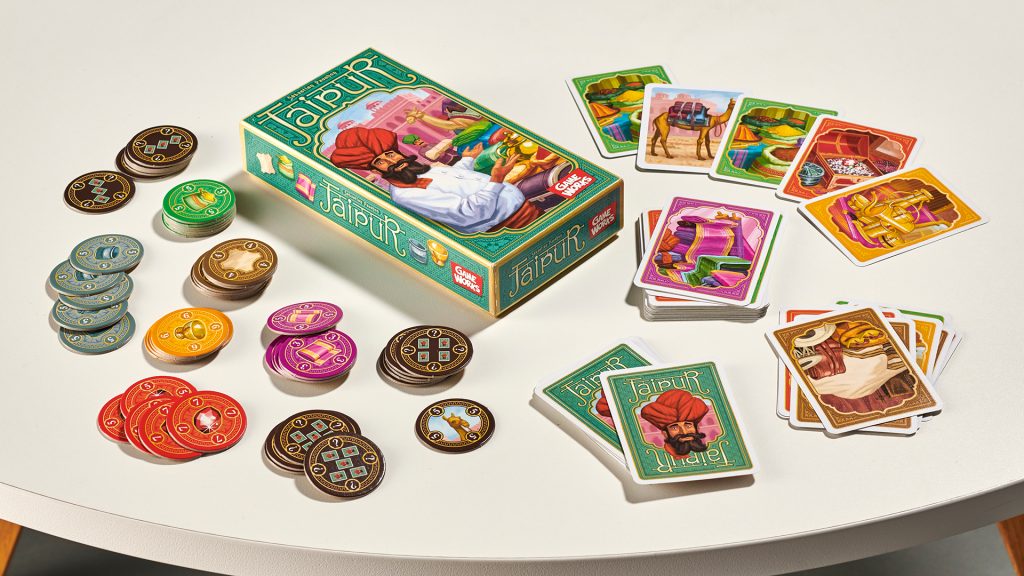 There is no defined strategy for winning. You can spend money in exchange for inexpensive items. Strike yourself out. Would you rather buy expensive things for a higher payment later on? That’s fine as well; you have space to explore and many ways to do it.

Be mindful of your enemy. Trading earns you chips from your limited stack, which are worth points. Unfortunately, the number of points decreases as you move down the pile. That suggests your efforts may be for nothing if your competitor beats you to the punch.

Tichu is easy to learn if you’ve played Rook, Euchre, or other similar card games. The cards are standard (2 Aces), including four unique cards: dog, dragon, mahjong, and phoenix. Aside from these cards, what makes Tichu special is its combination of card play.  Aside from single cards, you can also play entire houses, straights, and other combos.

Buying the best horror card game is unusual, but if you’re into it, Arham Horror is right for you. One or two detectives must work together in this game to solve esoteric riddles and conspiracies. In contrast, the Ancient Ones strive to penetrate our planet.

The decisions you make not only impact the outcome of the situation but also have far-reaching consequences. They can persist throughout the game, requiring players to confront and conquer their inner demons. 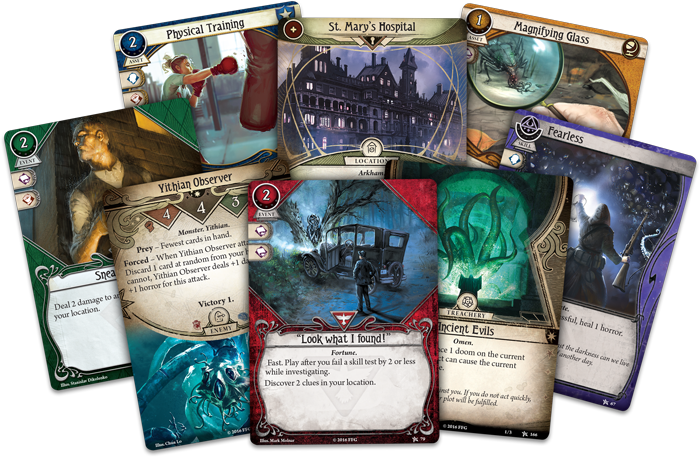 The players, or ‘investigators,’ roam the renowned Arkham City.  During their stay, they collect spells, weapons, clues, and other objects to assist them on their journey. They begin by avoiding powerful creatures before going on to enter a few gates and lock the open gates, which is the game’s goal.

Once the gates have been blocked and the investigators have gathered the necessary resources, they launch the last attack on Mythos to close the most guarded  portals. If they are successful, the world will be saved. If they fail, the Ancient One will rise for the last battle, and you will have to fight for your life!

Mansions of Madness transports you to Arkham, Massachusetts, and reveals a horrible mystery. Playing it is like enjoying fantastic horror movie video games.

In the darkness, spectral presences linger. In schools and temples, horrors lurk.  Something is wrong with this village. Those who are clever are just consumed; those who are unlucky are left as shattered, mad remnants of their former selves. Mansion of Madness is not easy to play, but it’s highly engrossing and spectacular!

Mansions of Madness has a one-of-a-kind map that guides players through a pre-determined scenario, with various alternative storyline options and conclusions. It is played in rounds, with two stages every round: Investigator and Mythos. These are played on a loop till the players win or lose.

The scenario chosen while setting up the game will tell the Investigators what they need to complete to win. What’s the catch? The players are unaware of this goal. It is up to you to solve the riddle and discover the final aim as the game advances. This answer may be obtained by attentively listening to the scenario’s prologue and meticulously scrutinizing hints as they are uncovered.

The goal will be disclosed later in the game, and the players will have one more assignment to do. If they take too long, the game’s goal may alter or become overly complex, making success unlikely. Finally, investigators must collaborate as a team to guarantee that their operations are efficient and that they can fulfill the mission before time runs out.

Sushi Go is a mathematician’s fantasy. It’s a draft-based scoring card game in which you take turns selecting a card from your hand and passing it to the left. Whether you opt for high-risk, high-reward cards like Sashimi, which takes three of a kind to get 10 points. You can also get fewer cards depending on the hand and the players surrounding you.

Each game has three rounds, each lasting approximately five minutes or less. This makes the game easy to play a few times a night. Sushi Go! is also affordable. If you’re just getting started with card games, this is a fantastic one to start with.

If you are looking for a card game to improve your memory, Scrimish is for you. Fresh from the box, it comes with two packs of cards that allow up to four people to play in teams. You can also buy more packs if you want to accommodate more players.

In this game, every player has five facedown card heaps in front. Then, they will attack the other player by pulling a card from the top of one of the piles. The game’s goal is to convince the other player to disclose their Crown card, which is hidden at the bottom of any of their piles. You can attempt to remember where your opponent’s cards are so that you can plot against them.

Scrimish is a handy and fast-paced game that lasts about 10 minutes, making it ideal for passing the time while you travel.

Munchkin is unquestionably one of the most fun board games for adults. It’s similar to Dungeons and Dragons as your goal is to become stronger, fight monsters, and eventually, prevail.

Munchkin’s primary goal is to reach level 10, which requires defeating enemies. Isn’t it simple? It’s more complicated than you think, as other players attempt to prevent you from succeeding. Alliances will emerge, friendships will acquire confusing new levels, and you’ll all ponder why you still let the same guy win over and over.

Sometimes it can be challenging to know which card game to buy. There are so many to choose from, some of which can be expensive. If you are considering purchasing a new card game, this article has detailed some of the most popular card games of 2022, so you can make an informed decision.