The Eerie Horror Film Festival is pleased to announce that actor/director, Leonard Lies, aka “The Machete Zombie” from 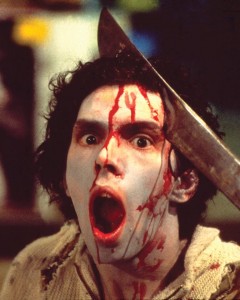 George A Romero’s “Dawn of the Dead”, will be a guest at our upcoming 2015 event!

Piloted by Producer and owner Leonard A. Lies, Dream Catchers Films, Inc. has been an active member of the film industry since 1981.

Since that time Leonard has established himself as a dedicated and inspired director, producer, writer and editor. Leonard’s background experience includes work on theatrical films, commercials, documentaries and educational productions.

He is currently in pre-production on a high-end kids show for Television entitled The Fabulous Adventures of Mr. Buckethead, about a live action super hero who can travel through time and space, and has a bucket for a head that contains the mysteries of the universe inside. During each episode Mr. Buckethead battles strange and funny monsters to uphold the peace and tranquility of the human race.

On the opposite end of the spectrum Leonard has just completed one of his most challenging films as a director and editor entitled, Under the Umbrella Tree. This film, produced by Louis A. Picard and Pauline Greenlick is a completely true-to-life documentary film that takes place in Uganda. The film is a window into the life of Victoria Nalongo Namusisi, a woman who took it upon herself to single-handedly intervene into the lives of desperate street children who had no place to go and no one to care for them. Since 2000, she has brought over 100 children into her own home who had been abandoned by their own parents because of poverty, HIV/AIDS, death due to civil war, and may other difficult situations. Over 95% of these children would have died without Victoria’s love and commitment to life.

Leonard and associates Louis A. Picard and Pauline Greenlick recently completed a new film dealing with gender violence Unveiling the Scars. This fifteen minute documentary, filmed on location in Uganda, follows the journey of acid attack survivors and their recovery. Leonard was the director and editor on this inspiring film.

Leonard (aka Lenny Lies) started working as a professional on George Romero’s cult horror Dawn of the Dead. His image as the Machete Zombie in Dawn of the Dead has become a global horror icon.

Leonard has been a guest at many horror and pop culture shows throughout the United States, Germany and the UK.